Decompression Sickness, also called The Bends and Caisson Disease, is 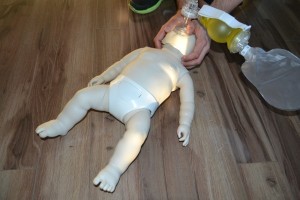 caused by the formation of gas bubbles that arise from changes in pressure. The dissolved gases, chiefly nitrogen, come out of solution in bubbles and are capable of affecting any part of the body including the skin, joints, lungs, heart and brain. This is why it typically occurs with high altitudes, scuba divers and aerospace events. However, decompression sickness often occurs with scuba diving, thus the article will focus on this activity.

As a diver descends further below sea level, the nitrogen from the diver’s air tank will increase in pressure, thus causing more nitrogen to dissolve into the body tissues. The longer the diver stays at depth, the more nitrogen dissolves. Over time, it will build up in the tissues of the body because the body has no use for it.The release nitrogen buildup and eventual block of blood flow is what causes the underlying symptoms in decompression sickness. This leads to disturbance in blood vessels and nerves, either through tearing or stretching them. As the diver returns to sea level, the pressure due to nitrogen reduces.

Risks for decompression sickness will depend on the depth of dive, amount of time at depth, and rate of ascend, thus:

The symptoms arising from decompression symptom depend on how quickly the diver returns to surface and what organ is involved. Most symptoms occur within the first six hours, rarely do they surface within the first hour.

Basic first aid should be applied immediately if anyone begins to manifest symptoms of decompression sickness.Seek medical attention immediately. Earlier treatment will result to better chances of avoiding complications.

Although taking the following precautions does not assure of avoiding decompression sickness, it does reduce the risk.